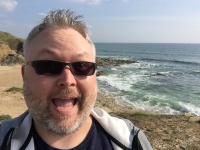 On the Beach in Brittany, France

I joined MakeICT in January 2017, many years later than I should have. I had heard about Make, but I thought it was just 3D printers and laser cutters. Which, are totally awesome. I found out that there was so much more, and dove in, taking classes, and doing projects in the Woodshop, Ceramics Studio, Fab Lab, Printing Studio.... well, you get the idea.

I've recently stepped up and been elected to the position of Secretary on the Board of Directors.

I work for the Kansas Food Bank, which keeps me really busy. When I'm not there, I'm either at Make, or at home binge watching something cool, or maybe dumb, on YouTube.

Everything at Make is interesting! But specifically: